The mission of the Foothill-De Anza Community College District is student success. We accomplish this by providing access to a dynamic learning environment that fosters excellence, opportunity and innovation in meeting the diverse educational and career goals of our students and communities. 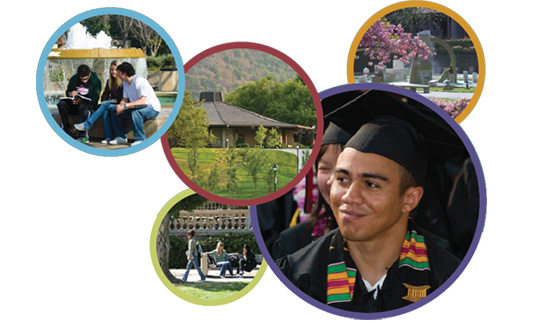 The Legacy of Foothill-De Anza

The Foothill-De Anza Community College District marked its golden anniversary in 2007, celebrating its first 50 years of excellence, opportunity and innovation in educating a growing and diverse student body.

The legacy of the district had its origins in a post-World War II California that represented unprecedented opportunity. Industry burgeoned, jobs were plentiful, urban centers and suburbs flourished and affordable housing abounded. It was in this climate of growth and essential optimism that local educators came together to explore the formation of a community college district, which area voters approved by a six-to-one margin in 1957.

The year 1957 also saw the election of the first trustees of the Foothill Junior College District: A. P. Christiansen, Dr. Howard G. Diesner, Mary S. Levine, Robert F. Peckham, and Dr. Robert C. Smithwick as president. Monterey Peninsula College President Calvin C. Flint was named by the five-member governing board as the district’s first superintendent and president. Within six months of beginning his post in 1958, Flint hired the college’s first faculty members and classes began, held for the time being in an unused elementary school—the “Highway School” in Mountain View. Foothill offered a full range of academic and career programs to 1,414 students, and just months after it opened, became the first California community college to be given full accreditation in its first year. By that time, area voters had already approved a $10.4 million bond and trustees had selected the permanent site of Foothill College, purchasing the land for just over $1 million. The campus, which garnered several architectural awards, opened on September 5, 1961, to rave reviews.

Even as classes were commencing at Foothill, the board of trustees was already exploring the creation of a second campus, and in 1959 established a citizens’ committee to study methods of financing a new college. In 1962, voters approved a $14 million bond for the construction of a second Foothill Junior College District campus in Cupertino. The land for the college, purchased for $1.1 million, was the site of Beaulieu, a historic vineyard and estate. Former Foothill Dean of Students and then Director of Research and Planning A. Robert DeHart was named president of De Anza College. September 1967 marked the first classes, with more than 3,000 students attending. In 1971, the Calvin C. Flint Center for the Performing Arts was dedicated on the campus, honoring the district’s first chancellor and the architect of its legacy.

By the time De Anza opened, the zeitgeist was markedly different from that in which Foothill was formed. The country, and certainly California, was feeling the incipient growing pains that marked a country in transition — the birth pangs of civil rights and women’s rights movements aiming for equality and inclusion, as well as the wounds of a country fractionalized by the Vietnam War. Some held steadfastly to longtime assumptions and values, but as the postmodern age took hold, many — particularly students, teachers and intellectuals throughout the nation—questioned what had been held as truth.

Through the seemingly boundless optimism that marked the opening of Foothill and the upheaval that greeted De Anza College, the Foothill-De Anza Community College District’s legacy of opportunity was born. From the academic rigor demanded and designed by the founders to Foothill’s record accreditation to the carefully chosen founding faculty and later the pioneers who left Foothill to form a new college at De Anza, the legacy of excellence grew alongside the diversity that would shape California’s future. And over the next 50 years, the legacy of innovation became ever more apparent.